Why Are College Sports So Important?

In North America, college sports have gone on to become so much more than a recreational pastime. Students are able to earn scholarships and even become professional athletes based on their ability and development.

Collegiate sports activities are certainly held in high esteem, but why are they regarded as being so important?

The first college sports team was established in 1843, when Yale University introduced a rowing club. Harvard University did the same a year later, laying the foundations for a competitive boat race between the two institutions. The Yale-Harvard Regatta rivalry continues to this day but rowing has gradually been joined by a number of other popular sports including baseball, basketball, and football.

Official governing bodies were established during the first half of the 20th century, most notably the National Collegiate Athletic Association (NCAA), which still remains in place today. Throughout the 1950s, the NCAA altered the structure of intercollegiate sports to boost competitiveness, including new scholarship policies.

As a result, college athletics continued to grow, with televised events elevating college sports to a whole new level from the 1980s onwards.

The NCAA has three divisions (I, II and III) that include a range of universities and colleges offering 4-year academic programs.

NCAA Division I schools attract the best players in the United States and Canada through sports scholarship schemes, although Ivy League institutions such as Harvard, Yale or Columbia are more likely to reserve scholarships for academic high achievers.

Pathway to becoming a professional

Competitive collegiate sports are often considered to be a precursor to the equivalent professional level sports. Organizations such as the NHL, NBA, NFL, and MLS all operate a player draft system which provides a direct route from college to professional.

In some cases, it is also possible to turn professional as a high school graduate or through minor league scouting. Whichever pathway is chosen, it is a cutthroat landscape that rewards very few athletes in the end.

Most sports only manage to accommodate around one out of every ten elite college athletes looking to turn professional.

However, the good thing about the college sports system is that it encourages students to balance academic and sporting activities as a way of ensuring that they are able to secure a successful career, whichever path they end up taking. 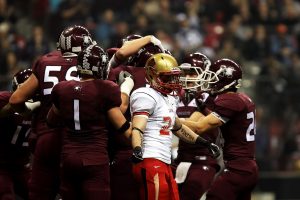 A lot of planning needs to happen behind the scenes to ensure that college sports teams have the best chance of success – as such, coach and athlete management has a particularly key role to play.

Univerus Sport & Recreation software helps create an efficient process for administrative tasks. Schools, colleges, and universities can use the system to facilitate communication between coaches and athletes as well as manage athlete records, monitor eligibility and organize travel.

It also makes life easy for coaches and admin staff. The athlete database can import data from external sources including CCES, U Sports, and other registration software. There is a comprehensive search function too – users can filter by sport, athlete name, student number, email, roster, or status to pinpoint the information they need.

Athlete information such as attendance records can be analyzed in an interactive dashboard, improving accountability and compliance with college and governing body regulations.

What is the future of college sports?

The pandemic is likely to have had a profound long-term impact on the future of college sports. A quarter of high school students decided to defer their college enrolment in 2021, and those that did start their academic courses were held back from in-person learning and other campus-based activities. Sports were deemed particularly high-risk, and this resulted in a lot of programs being suspended.

A curtailed college sporting calendar has affected the long-term progression of athletes. It has been impossible for them to gain the necessary experience that comes with regular competition. Only time will tell, but it certainly looks as though there could be a significant talent drought in the next few years if college athletes are unable to make up for lost time.

Colleges and universities will also be hoping for an increase in student numbers following a period of tentativeness among high school graduates. Enrolments don’t just give institutions a larger talent pool, they also provide increased funding for school sports programs.