On average, each University sponsors around 20 different athletic programs, with approximately 500,000 students participating over the course of a school year. Some of these college sports stand out more than others due to their historical importance as well as the fact that they can define an athlete’s professional career.

Baseball is one of the longest-running college sports, with the first intercollegiate game taking place in Pittsfield, Massachusetts in 1859. There are now 300 NCAA Division I teams competing in the United States

Despite its long-term popularity, college baseball plays a smaller role in developing elite players compared to basketball and football. This is partly due to the larger scale of baseball’s minor league system, which has a history of supplying major league players.

College baseball is still a popular spectator event though – over 40,000 people attended a 2004 game between Houston and San Diego State.

There are no official minor league feeder teams for American or Canadian football, making college teams a vital component of the professional game.

College football leagues are generally recognized as the second tier of the sport, sitting directly below the NFL in the United States and the CFL in Canada.

It is effectively a shop window for professional teams, with an athlete’s performances in college directly impacting their chances of becoming a professional player. After three or four years of college competition, the best collegiate players will be put forward for the NFL draft, where 256 players will be selected to play professionally.

The stakes are high, and in some parts of the United States, such as the South and Midwest, college football is the ultimate spectator sport. Games are regularly televised, and stadium attendances often exceed those seen for regular NFL games – in 2016, the ‘Battle at Bristol’ game between Virginia Tech and Tennessee took place in front of an astonishing crowd of 156,990 fans. 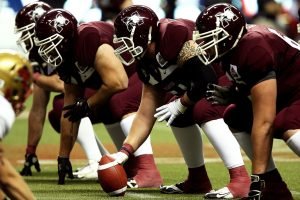 Basketball owes its existence to a college teacher named James Naismith, who invented the sport in 1891. Within a decade, schools located all over the United States had started to establish their own teams. Hundreds of colleges now participate in competitions sanctioned by various collegiate athletic bodies

Much like college football, college basketball is an important foundation from which players can transition into the professional game.

The NBA draft takes place annually, giving the top college players an opportunity to be selected to play for an NBA franchise. Individuals can only be declared for the draft once they have completed their four-year college eligibility.

In the United States, ‘college hockey’ refers to NCAA-sanctioned competitions featuring college and university teams. This differs from Canada, where ‘college hockey’ is a term used to describe community college and small college ice hockey. Competitions involving four-year institutions located in Canada instead fall under the banner of ‘university hockey’ and are governed by U Sports.

Men’s college hockey is effectively a feeder system for NHL franchises in the United States. Around one in three (300+) current NHL players come from the U.S. college hockey system, which suggests that it is a good route to becoming a professional athlete.

Intercollegiate lacrosse began in 1877 with a game taking place between New York University and Manhattan College.

The NCAA organizes over 900 lacrosse programs across the United States, highlighting its popularity at colleges and universities nationwide.

NCAA Division I schools are permitted to offer lacrosse scholarships covering up to 50% of a student’s tuition costs based on their playing ability. 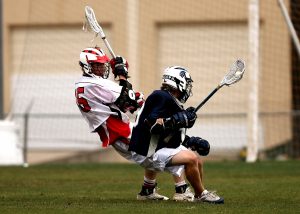 In the United States, college soccer teams participate in conference and non-conference competitions throughout the fall season, culminating with the College Cup tournament.

After graduating, the top men’s soccer players are often awarded contracts by Major League Soccer franchises or signed by professional teams worldwide. Similarly, the best women’s soccer players can go on to join teams in the National Women’s Soccer League or other leagues throughout Europe, Asia and Australia.

Schools participate in a unique form of wrestling that is unique to college competition. The rules of collegiate (or folkstyle) wrestling differ slightly from the freestyle and Greco-Roman wrestling styles that have been showcased at the Olympic Games over the years.

The NCAA organizes competitions across numerous weight classes that take place from October to March. Colleges and universities generally compete in something called a dual meet, but there are also several tournaments where eight or more wrestlers/teams will go head-to-head against competitors from other schools in each relevant weight class. These tournaments are used to establish athlete and team rankings.